[Mother Therapy] What can I do when my daughter has an argument in a chat room with friends? 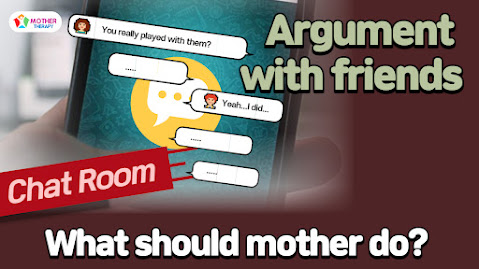 It is understandable that mother is worried about her daughter getting involved in an argument with friends and experiencing conflicts in relationships. You must be worried about something worse happening than just having an argument, but you don't know exactly how you can help.

The first and foremost thing to consider is your daughter's safety. Safety includes not only physical safety but also psychological safety. First, you can carefully listen to what happened to her. You don't have to make any suggestions for solutions. You can just show her how much you are interested in what is going on in your daughter's situation and understand her problems and difficulties. You shouldn't tell her what to do and what not to do, but you can tell her about your own experiences similar to her situation. Then, she is likely to figure out what to do in a relationship with friends on her own.

There are many possibilities on why such a situation has occurred. You can help her to broaden the perspective and look at the situation from different angles by freely talking about it. Maybe the friend is envious of your daughter, or your daughter is causing problems in the group. You can help her find the root cause of the conflict by having different points of view instead of judging what is right and what is wrong.

When the mother gets involved in children's conflicts directly, it may cause even more serious problems. Pretending you don't know or are not worried may lead her feel neglected. When you first listen to your daughter's thoughts and feelings, and then, share your ideas empathizing with her, your daughter will stabilize her psychology and be able to think and judge rationally. In the process, she will grow and mature psychologically.

There can be three different paths of life of women who experience husband infidelity. All of them start with the pain of death due to ...